The Gendarmeriad - Carmen Dan coordinated the intervention. The chain of command

On the evening of August 10th, the Minister of the Interior was present in her office until around 3.00-3.30.

Carmen Dan did not deny that she was present in the Ministry office, but claimed she had not given any orders. &quot;I publicly invite any MAI employee at any level who received any direct order of operative intervention from Minister Carmen Dan to speak out,&quot; she claimed in a press  statement on August 11th. What the Interior Minister has not said is that the gendarmes were not the only troops to act in that large-scale operation in the night of August 10h. Police units, traffic police, Intelligence structures of the Ministry of the Interior and, according to sources, even border police, were also present in Victoria Square. The coordination of these structures was only possible at the level of the Ministry of the Interior, and could not be left under the sole responsibility of the Prefect of the capital city, for instance.

Moreover, in order to coordinate this type of missions, there is the Directorate General for Operational Management within the Ministry of Interior. This structure &quot;ensures the monitoring of the operational situation, the integrated coordination of the missions of the MAI structures during special and crisis situations in the field of public order and emergency situations, the management of the operating IT systems, as well as the geographic cover of the missions by procuring, detaining and managing geospatial information&quot;.

The Man in the shadows: Valeriu Mihai

Officially, the commander of the structure is Chief Commissar Stefan Savulescu, who is only &quot;empowered&quot;, just like Sebastian Cucos, the former head of the Romanian Gendarmerie. Unofficially, on the evening of August 10th, the man who secured the connection between Carmen Dan and the MAI structures, as well as the connection between Carmen Dan and Liviu Dragnea, through the secretary of state Adrian Mlădinoiu, was the under-secretary of state within MAI, Valeriu Mihai, Chief Police Commissioner. Mihai was a colleague of Mlădinoiu’s within the MAI Intervention Unit, Aquila. Subsequently, the latter became Dragnea&#39;s bodyguard, then became a close associate of the PSD leader and is now a secretary of state within the General Secretariat of the Government. Moraru: Video footage in the COC premises Adrian Moraru, President of the IPP (Institute of Public Policies), a former advisor to the ex-Minister of Interior Dan Tudorache, argued that all COC (Command and Operative Center) meetings are audio-video recorded, and the prosecutor&#39;s office should investigate the August 10th and 11th recordings. &quot;I would also inform the Military Prosecutor&#39;s Office that everywhere in the COC there is permanent AV recording and that it is easy to determine the persons who actually coordinated the intervention, from the MAI headquarters. And if they ask for these records, some big surprises might emerge&quot;, wrote Moraru. He also asked the military prosecutor to check the recordings of radio talks between the gendarmes.

This article was translated into English by  Diana Stoica 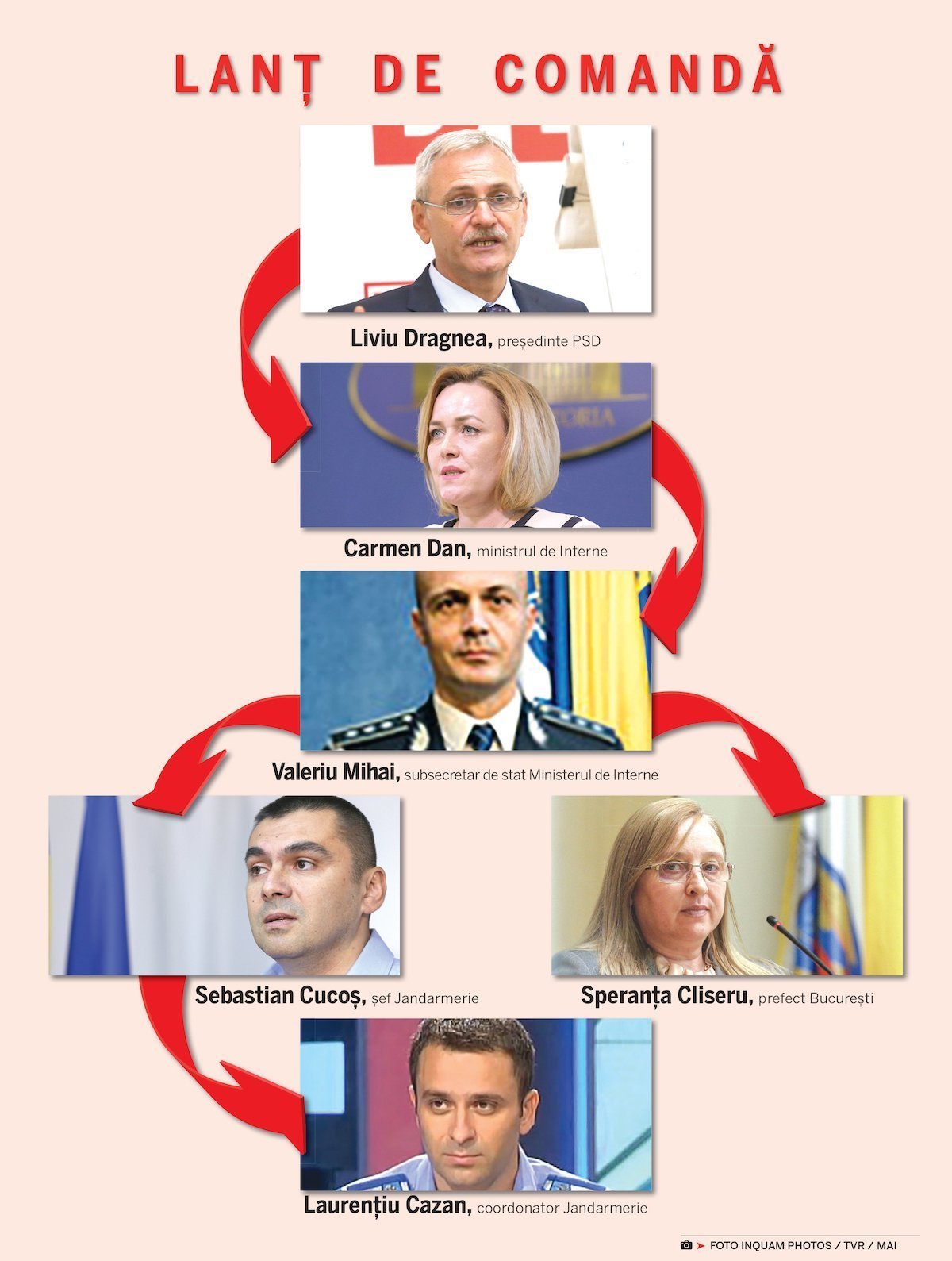 Read the entire feature about The Gendarmeriead

The chronicle of an announced opression. Who are the victims?

The lies told by the Gendarmerie

In brief, the story of a manipulation

Before and after the 10th of August: 12 dark days